Maybe my neurons are shorting out! Maybe I just don’t get it! Maybe my common sense is not so common! Yes, I know one should not talk or write so much about the political world and/or religion – just creates contrarians, enemies, and maybe a few friends. Yet, I’m a ‘dinosaur’ too old for ‘political correctness’ and all the truly gobbledygook in the political rhetoric today… I’m just going to write it as I feel it. My feeling is we have made mistakes in decisions about foreign policy, our justice system, the aforementioned ‘political correctness’, and in a number of bureaucratic areas. Still, we are the greatest nation on earth, and our freedom, liberty, and value systems are generally in healthy cerebral hemispheres.

‘What is he talking about?’ you ask.

I’m talking about just one episode in this blog, but it ties in to so many others. This blog’s episode deals with the decision to make public a $50,000,000+/- report about post-2001 ‘Enhanced Interrogation Techniques’ of radical Islamic terrorists. $50,000,000+/-? Our tax-payer money! Really, for a report that staggers me in its ‘abstract pedantry’, in its obscene clarity of purpose, its partisan anger, and its ridiculous conclusions.

In 2001, terrorists stole jet passenger planes, destroyed towers of commerce, government buildings, and, more devastatingly, took the lives of some three thousand American citizens – ripping to shreds the fabric of many families and friends. It was the most singular tragedy our homeland has known since our great Civil War…no, I’m not forgetting the ‘sneak attack’ of Pearl Harbor on Oahu on December 7, 1941 and the other high casualty counts of the wars we fought. This terrorist attack of September, 2001 brought a new kind of reality to our rational minds. It brought the terrible realization that our United States is vulnerable and has enemies like we have never known. Those who were there in 2001 know of what I write. Perhaps those who died that awful day in our history would have preferred some ‘water-boarding’, some ‘sleep deprivation’, some ‘loud and constant noise’, some ‘ice baths’, instead of jumping to their deaths out of high ‘Trade Center’ buildings or being blown to bits or burned beyond recognition. Perhaps, if given the terrible choice, their wives, husbands, children, and parents would have chosen such tactics over the death of their loved ones.

Just two questions! Number one: Do you dearly love your children? Number two: If a captured terrorist knew of an operation where your children were about to be blown up or their heads severed, and we could obtain information from that terrorist which would prevent that event, would you not go to any lengths to save your children? If your answer could possibly be ‘No’, do not breathe in my air space for you are odious and the worst kind of human being. Yes, a hundred times ‘yes’, life has sanctity for me.

In September, 2001, the US was in a panic. Our president at the time, government agencies responsible for our safety and security, all were desperately trying to make our country as failsafe as possible, devising plans and procedures to protect us. It was a terrible tragedy of the worst possible kind we needed to face. We were to be fighting a new kind of war, not a war with our enemies in uniform and certain expectations of behavior. Adjustments needed to be made. We were to be testing our values regarding human lives and the very core of our existence. So, the CIA (Central Intelligence Agency) devised policy for dealing with captured terrorists, euphemistically referred to as the ‘Enhanced Interrogation Technique’ policy. These plans were shared with the government people who served on an important select committee and to all the government people we elected to serve in protecting our nation. From all I’ve heard, read, and seen, those plans were acknowledged and approved, tacitly or otherwise.

Those ‘Enhanced Interrogation Technique’ plans have kept our nation safe for the years since that awful day in September, 2011… With our borders as porous as they seem to be and the lack of a comprehensive immigration policy, some of us might consider this a minor miracle.

Fast-forwarding to now, a senior member of a select committee, a senior member who was not on that above referenced select committee, has released a $50,000,000+/- report that maligns the CIA and the ‘Enhanced Interrogation Technique’ policy approved many years ago. The Madame Chairperson, her committee, and staff worked on this approximately 50,000-page report for several years and have now uniformly decided that the ‘Enhanced Interrogation Technique’ policies devised after that surreal day in 2001 were devoid of our American values, our commitments to the constitution, and in fact damaged our country throughout the world. The chairperson and her committee would have us believe ‘Enhanced Interrogation Technique’ procedures (water-boarding, sleep deprivation, loud music or noise, et al) did nothing to help us in our fight against terrorism… Well, sure, bad information was always a possibility, but the good information far outweighed the bad. After all, ‘measuring sticks’ were surely used to check information gained through interrogation.

May I cut to the proverbial chase?

It has been proven that the CIA did indeed get information from captured terrorists that helped save thousands of life. In fact, one such interrogation would ultimately lead to the death of Osama Bin Laden…something not mentioned in the victory lap of our current president. No one from the CIA was interviewed by the ‘select committee’ and it appears that committee acted on their own as judge and jury to reach their conclusions…like a case where the prosecution is the only side to be heard – forget the defense side!

For me, this ridiculous partisan report is purely political ‘pay-back’ for the Senate side of Congress and a political party who hated our last president. That same political party is now losing their control in congress, and this Senate Committee’s ‘AIT’ report is now to give a great propaganda victory to the people of the countries that hate us and want us dead. To speak abstractly of values when American heads are being cut off and thousands of people are being killed is absurd and ludicrous. Great legacy, this costly and ‘national soul-searching report’ that takes us closer to the edge of political insanity and less safety for our country.

Here is what I feel and think, we, the majority of our beautiful country, still have our values. Nothing has changed…except the way we find and kill those radical terrorists who will not hesitate for a moment in killing us. Fighting people with an ideology that says ‘our way or the highway of death’ is relatively new for our country. When one considers that our nation pays out some fifty billion dollars ($50,000,000,000) in foreign aid, I’m thinking there is something wrong with our ‘moral equivalency’ issues. AND, just one added nugget of truth, some in the United Nations wants people prosecuted for our ‘EIT’ policies… Don’t we pay most of the ‘freight’ in the United Nations? Can we perhaps tell those who are railing at us to ‘go to hell’? Can we perhaps just ‘close the doors’?

Putting it as simply as I know how, an NBC anchorman asked of his CIA guest, paraphrasing: ‘If one of your children were exposed to this kind of torture, would you not want it stopped?’ Instead of considering an answer to that stupid question, how about this one: “If you could obtain information by water-boarding a terrorist that would stop the killing of your son and daughter or maybe countless American lives, would you use this ‘Enhanced Interrogation’ procedure?” Of course, we would save our sons, daughters, and countless lives…unless, of course, I’ve got values all mixed up with the dictates of some immoral ‘Satan Kill Society’. We are dealing with people with an ideology that borders on idiocy – ‘If you don’t practice my religion, you’re dead! When I die a new life starts for me! When I die, there are virgins waiting for me! It’s my way or the ‘beheading highway’.

There are times when I have ‘Rip Van Winkle’ thoughts… What country am I living in? What happened while I slept?

Do I rant and rave because there is little else I can do? Can the liberal and progressive minds stretch so much further than I could allow mine to stretch? Is it folly for there to be so much anger and hatred in our world? Is my conservatism so old and worn-out? Could I be so wrong about all of this? If I am, guess maybe my ticket is ready to be stamped and the ‘Soylent Corporation’ can have me for the nutritional plankton my body might hold…

If some of you would want more of my ‘rant and rave’, I’ve got just the book for you. It is my one government/political offering, Joe Public’s Political Perspective. It’s a reasonable short read…for good reasons. I’m no political analyst, pundit, or strategist, just, well, Joe Public spouting off about what he senses is going on in his country. Some of you might cater to the views within the book. Others will not. That’s okay – everybody has to be somewhere! 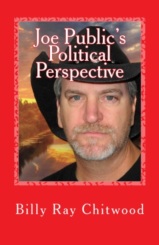 Below are links to my connection sites:

http://billyraychitwood.weebly.com (My bio and books)

Some blog awards proudly displayed below: