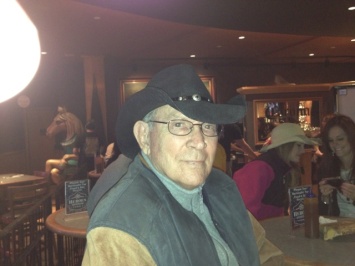 He was six feet tall with a stern angular face and he walked with a limp, like one leg was shorter than the other. She watched him walk to the mahogany bar and take a stool next to her, his only choice as the late afternoon crowd was building. From the pretty bar maiden he ordered a double Makers Mark, three ice cubes, and a splash of water. Though his big cowboy hat and suede jacket gave him a casual air his voice had a cultured Texas tone, and he seemed conscious of her watching him.

“Afternoon,” he looked at her and spoke, “you saving this seat for someone?”

“No, it’s all yours… I like your hat.” She responded, feeling giddy on her third drink.

“Thanks, I get that a lot…it’s a special hat to me – with a great personal story…”

The bar maiden delivered the stranger’s drink, and he held it momentarily in his right hand, looking down into the glass of amber liquid, lost in deep thought. Then, he consumed half the drink in one gulp and stared straight ahead at the row of liquor bottles lined up along the smoke-mirrored back bar. It was as though he forgot they had exchanged a few words.

His comment about ‘a great personal story’ had piqued her interest.

“Look,” she said, “I’m not being forward and I’m not a ‘working girl’. My name is Janice and you seem like a very interesting man. You mentioned that hat you wear has ‘a great personal story’… Do you mind if I ask what makes it great?”

The stranger put his drink on the napkin, took a deep breath and looked at her with his penetrating brown eyes. “Well, Janice, let me get another drink and I’ll tell you that story.”

She was way ahead of him, told the bar maiden to bring two more drinks and put them on her tab.

“Well, now, hold on a moment, I can’t let you be buying me drinks, Janice. That’s not right, and we just met.”

“Well, Tex – since you won’t give me your name, I’ll just call you, Tex – I’m sure you know we live now in a new ‘free society’ where the genders are equal, so it’s my pleasure to treat…”

“I’ll be damned, ‘Tex’ is what I’m called, and, I’m not going to spoil this ‘free society’ thing you’re talking about. Thanks for the drink.”

Tex began. “Janice, this hat has passed through three generations of my family, so, actually, there are three stories. My grandfather was a Texas Ranger and he got bushwhacked outside of Abilene by two horse thieves and murderers. Left to die in the blazing sun he had just enough strength to pull that hat over his face to keep the heat and rays from broiling him. My father and other Texas Rangers found him in time to save his life. When my grandfather died from cancer some years later he left that hat to my father.

“My father wore that hat everywhere, told me many stories about that hat and how it played a part in many Texas Ranger battles. His main episode with the hat came during a Texas Ranger raid on a nest of cattle rustlers over near Fort Worth. During the raid a big Texas dust storm came up, and the hat was lost. My father did not give up looking for that hat, and about three weeks later he saw a man wearing that hat in Benbrook, Texas – not far from the raid site. The man told my father he found the hat near the old road going into Fort Worth. The man was reluctant to give up the hat, so my father ended up giving him $30.00 for the hat.

“Now, I suppose anyone hearing these stories about a simple cowboy hat would likely think me crazy, but my father had a fondness for this hat and made me swear to keep passing it on to my children. I didn’t wear the hat one day and I had a bad car accident. Call me superstitious and crazy but I’ve worn this hat every day since that accident. My father talked a lot about this hat and what it meant to him and his father…guess I’m following the tradition. Hell, Janice, you know about cowboy hats and Texans – they’re inseparable. This one here is big-time special for me.”

The two talked through several more rounds of drinks, decided they would have dinner together at the nice restaurant at the Hilton Grand Hotel where Janice was staying. There was for Janice an unusual lure about this man from Texas. She was smitten and did not want the evening to end. On a trip to the ladies room she found her waiter, signed the dinner tab, and told him to announce at the table that the dinner was ‘on the house’.

After the sumptuous dinner, Janice and Tex went to Janice’s suite where she put the lights low and the music played softly in the background. The evening took its natural progression to the bedroom and lovemaking.

Tex spent most of the night, rising from the king bed quietly around 4:00 AM, dressing, spending a few moments at the bar in the living room, and leaving a note for Janice. He then left the suite.

When Janice awoke, yawned, and looked around for Tex, she was sad that he was gone. Then, she happily noticed the note on the bar next to her purse.

You are a most special lady and it seems only appropriate

So very profitable to me over the past few weeks.

Thank you for a wonderful evening!

A frown came to her face and she noticed her purse open. She looked inside and found all of her cash gone. Then, she looked at the cowboy hat at the end of the bar counter, and the anger came. She threw the hat on the carpet and stomped it with both feet for several seconds. She kicked the hat, followed it, kicked it some more.

Finally, she sat on the golden chaise lounge and stared at the walls, breathing fast and hard.

Suddenly, her lips began to form a smile and it widened. Then, she laughed with gusto until the tears came.

Links to My Sites:

8 thoughts on “The Casual Stranger”