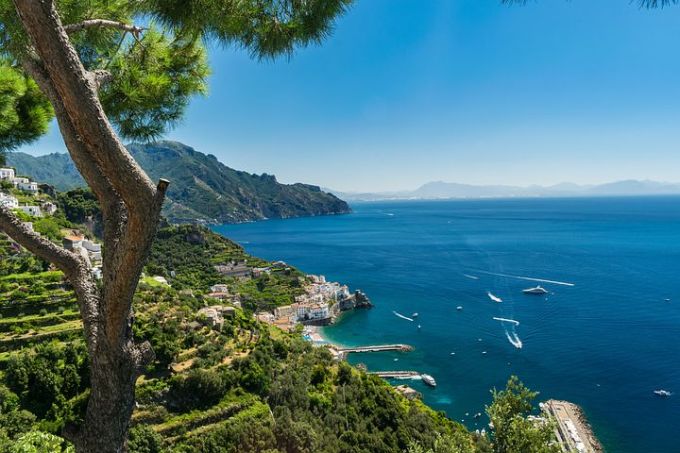 From Italy With Love

I thought it was all over!

There were two problems. My single engine plane coughed, sputtered, and acted like it was out of gas – but the tank was filled just twenty minutes before at the air park in Genoa. The other problem was lack of control – without success, I tried to control the Aileron, that hinged surface in the trailing edge of an airplane wing which is used to control lateral balance…think of a seesaw, keeping it horizontally straight without either end dipping down.

Bottom line: big problem with the plane’s engine out and my inability to glide the plane accurately to a spot for landing.

See the trees at the bottom of the picture above? Somehow, I managed to land the plane some ten feet to the right of those trees, with the right wing an inch or two from the sand and the nose about to plow into the ground. An abrupt action with the right wing somehow caused the plane to straighten its line and touched down roughly but then slowly moved to a stop with the friction of the sand.

No bruises, no cuts, no radio transmission, and no real damage…just some rattled nerves.

Actually, I sat there behind the stick for some seconds and felt pretty good – hey, I had a story to tell my film buddies back in Santa Monica. We were still young, chasing the ladies, and telling each other our tall stories. Because I looked a bit like Steve McQueen, my buddies gave me the nickname, ‘Cool Mac 2’.

I pulled the leather flight jacket from my near 200 pound, 6 foot frame, flung it over my right shoulder, grabbed my clothes bag from the cockpit, and started walking toward the buildings in the picture’s foreground. Only a few feet into my walk I saw an old jalopy heading toward me. My walk only lasted some three hundred yards before the jalopy stopped and a man and woman threw some Italian at me. Some I understood but the gist I did not.

The woman was beautiful, and the guy, well, he was handsome enough, I guess, but he was much older than the lady…for some obscure reason, I was wishing the duo was daughter and father.

“Sorry, I speak very little Italian. Do you speak Enlish?”

“Jes, we speak some Engleesh, but you just crash yur plane! Are you hokay?” Such a lovely voice to go with the face and body.

“Yes, I’m fine. I got lucky. But I could use a phone and some assistance in reaching people who can help me. Would you…”

The older man stopped me in mid-sentence, “Get in the car. We will take you you to our home where there is phone and food.” His white whiskered face showed kindness and blended in with his white wavy hair. He instantly reminded me of Maurice Chevalier…you know, the French actor who sang ‘Thank Heaven for Leetle Gurls, for leetle gurls get bigger every day’.

Rosina was the lady’s name, and Pauli was the gentleman’s name. I immediately liked them and found them most cordial and friendly. It was particularly tough for me me to avoid glancing at Rosina. Her long dark hair went to the middle of her back, framed a beautifully tanned exotic face, and her bluish green eyes sparkled with flirty coyness. She was wearing a slightly loose tan dress, but, had it been tightly fitting, my heart might have leaped through my shirt. I had worked with some lovely ladies in films, and this Rosina beauty did not take a backseat to any of them.

Pauli asked me what I was doing flying a plane in Italy.

“Well, Pauli, my girlfriend and I broke things off, and I was between jobs, never been to Italy and have always wanted to come and see it in person. I’ve been in love with your country ever since Clint Eastwood made those ‘Spaghetti Westerns’, well, actually, all my life. This was a good time for me to come… Oh, my name is Faron Brady. Flying is a hobby, and I just thought I would see some of your beautiful country…didn’t get much accomplished, I’m afraid.”

We talked, got well acquainted, and I felt we established a great bond. Pauli knew who to call to handle the plane and the rental company in Cortona.

When Pauli and Rosina found out I had no lodging in Cortona for the night, they insisted I be their guest, spend a few days, and tell them all about America. I had an idea Pauli was perhaps playing matchmaker for Rosina – without her necessarily knowing it.

After Rosina left the conversation to refresh herself before dinner, Pauli showed me to my bedroom. He announced wine and hors d’oeuvres would be served before dinner and that Madame Rosaria would be preparing dinner for serving at 7:00 PM… Madame Rosaria had been Pauli’s mistress and house manager since his wife died ten years prior. Out shopping, I would meet her later.

Suddenly, I was very tired. I took off my shoes and fell across the bed.

The nap came quickly, and I don’t know how long I slept. When I awoke, Rosina was standing in the doorway with the most seductive smile ever put on me. I raised to an elbow.

“Jes, you must freshen up and have some wine, the best Italian cheese, and hors d’oeuvres. We await you, Signore Faron.” She turned and left the doorway ‘in a most delightful way’.

Freshened, I joined my hosts in the living room. Madame Rosaria was a lovely lady as well and not a lot older than Rosina. It was a little scary! Both seemed to be putting the moves on me. Now, of course, this was likely an Italian ‘thing’ and not meant to be interpreted in a romantic fashion. Certainly, Pauli was not at all concerned by the actions of the ladies.

We drank, we ate, we laughed, we traded cultural distinctions and idiosyncrasies. It was one of the best evenings I could remember ever having.

In the end, Pauli and Rosaria went to bed, leaving Rosina and me alone in the living room, slightly tipsy and now fully engaged in our sensual maneuvers.

Believe it or not, I don’t remember how I ended up in bed alone. I could remember being sure earlier that being in bed together was a foregone conclusion. A lesson was learned: our cultural distinctions were definitely there and frustrating as hell.

Three days later, Rosina and I decided to be married in Cortona, honeymoon on the Amalfi Coast, then return to California.

Hey, I’m still stunned by the turn of events, BUT I must add, I am one happy ‘Cool Mac 2’… Steve McQueen, we miss you, buddy!

I cannot imagine anything in my life from this point on topping my Italian visit… I do indeed love that country – and, Rosina.

2 thoughts on “From Italy With Love”